After a weekend of introspection, I had a week of “no spection” - meaning muddled thinking. I was attacked by a germ.

I have mentioned my love of dictionaries. Well, I couldn’t help looking up the definition of the word introspection again which led me to musing which led to germ - I promise it does!

A mighty creature is the germ,
Though smaller than the pachyderm.
His customary dwelling place
Is deep within the human race.
His childish pride he often pleases
By giving people strange diseases.
Do you, my popet, feel infirm?
You probably contain a germ.

Germ has many meanings, of course. It can mean a minute life form, especially a disease causing bacterium. It can mean a small electronic listening device - a bug. By the way, part of the etymology of introspection is specere - to look - which leads to spy. And we know that spies are very fond of bugs! But one of the meanings of germ is something that may serve as a basis of further growth or development: the germ of a project.

In my book . . . I can only hope that my "muddled thinking" causing germ will soon give way to that one which allows developing a real project!

Side note I: Definitions were taken from The Free Dictionary (Online) and Merriam-Webster Online.

Side note II: Last week some 6th grade boys actually asked me about dictionaries. I was thrilled! As I have said, and as you can see by my last two blog entries, I love dictionaries! 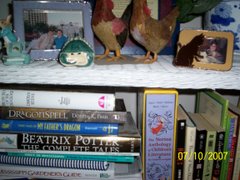